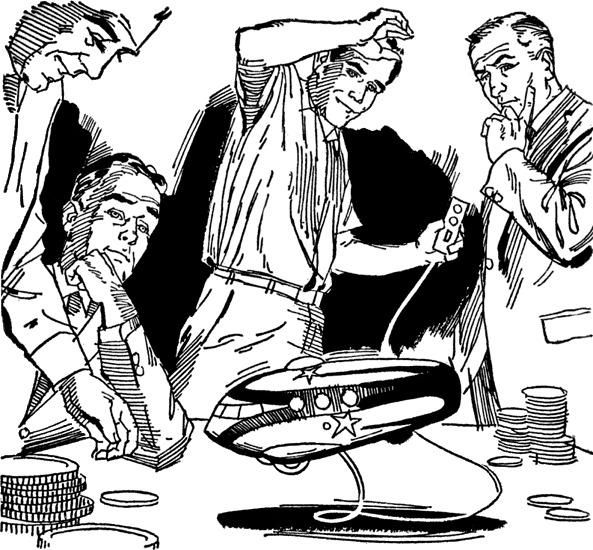 The gadget was strictly, beyond any question, a toy. Not a real, workable device. Except for the way it could

Because there were few adults in the crowd, and Colonel “Biff” Hawton stood over six feet tall, he could see every detail of the demonstration. The children – and most of the parents – gaped in wide-eyed wonder. Biff Hawton was too sophisticated to be awed. He stayed on because he wanted to find out what the trick was that made the gadget work.

“It's all explained right here in your instruction book,” the demonstrator said, holding up a garishly printed booklet opened to a four-color diagram. “You all know how magnets pick up things and I bet you even know that the earth itself is one great big magnet – that's why compasses always point north. Well... the Atomic Wonder Space Wave Tapper hangs onto those space waves. Invisibly all about us, and even going right through us, are the magnetic waves of the earth. The Atomic Wonder rides these waves just the way a ship rides the waves in the ocean. Now watch....”

Every eye was on him as he put the gaudy model rocketship on top of the table and stepped back. It was made of stamped metal and seemed as incapable of flying as a can of ham—which it very much resembled Neither wings, propellors, nor jets broke through the painted surface. It rested on three rubber wheels and coming out through the bottom was a double strand of thin insulated wire. This white wire ran across the top of the black table and terminated in a control box in the demonstrator's hand. An indicator light, a switch and a knob appeared to be the only controls.

“I turn on the Power Switch, sending a surge of current to the Wave Receptors,” he said. The switch clicked and the light blinked on and off with a steady pulse. Then the man began to slowly turn the knob. “A careful touch on the Wave Generator is necessary as we are dealing with the powers of the whole world here....”

A concerted ahhhh swept through the crowd as the Space Wave Tapper shivered a bit, then rose slowly into the air. The demonstrator stepped back and the toy rose higher and higher, bobbing gently on the invisible waves of magnetic force that supported it. Ever so slowly the power was reduced and it settled back to the table.

“Only $17.95,” the young man said, putting a large price sign on the table. “For the complete set of the Atomic Wonder, the Space Tapper control box, battery and instruction book...”

At the appearance of the price card the crowd broke up noisily and the children rushed away towards the operating model trains. The demonstrator's words were lost in their noisy passage, and after a moment he sank into a gloomy silence. He put the control box down, yawned and sat on the edge of the table. Colonel Hawton was the only one left after the crowd had moved on.

“Could you tell me how this thing works?” the colonel asked, coming forward. The demonstrator brightened up and picked up one of the toys.

“Well, if you will look here, sir....” He opened the hinged top. “You will see the Space Wave coils at each end of the ship.” With a pencil he pointed out the odd shaped plastic forms about an inch in diameter that had been wound—apparently at random – with a few turns of copper wire. Except for these coils the interior of the model was empty. The coils were wired together and other wires ran out through the hole in the bottom of the control box. Biff Hawton turned a very quizzical eye on the gadget and upon the demonstrator who completely ignored this sign of disbelief.

“Inside the control box is the battery,” the young man said, snapping it open and pointing to an ordinary flashlight battery. “The current goes through the Power Switch and Power Light to the Wave Generator...”

“What you mean to say,” Biff broke in, “is that the juice from this fifteen cent battery goes through this cheap rheostat to those meaningless coils in the model and absolutely nothing happens. Now tell me what really flies the thing. If I'm going to drop eighteen bucks for six-bits worth of tin, I want to know what I'm getting.”

The demonstrator flushed. “I'm sorry, sir,” he stammered. “I wasn't trying to hide anything. Like any magic trick this one can't be really demonstrated until it has been purchased.” He leaned forward and whispered confidentially. “I'll tell you what I'll do though. This thing is way overpriced and hasn't been moving at all. The manager said I could let them go at three dollars if I could find any takers. If you want to buy it for that price...”

“Sold, my boy!” the colonel said, slamming three bills down on the table. “I'll give that much for it no matter how it works. The boys in the shop will get a kick out of it,” he tapped the winged rocket on his chest. “Now really – what holds it up?”

The demonstrator looked around carefully, then pointed. “Strings!” he said. “Or rather a black thread. It runs from the top of the model, through a tiny loop in the ceiling, and back down to my hand – tied to this ring on my finger. When I back up – the model rises. It's as simple as that.”

“All good illusions are simple,” the colonel grunted, tracing the black “thread with his eye. “As long as there is plenty of flimflam to distract the viewer.”

“If you don't have a black table, a black cloth will do,” the young man said. “And the arch of a doorway is a good site, just see that the room in back is dark.”

“Wrap it up, my boy, I wasn't born yesterday. I'm an old hand at this kind of thing.”

Biff Hawton sprang it at the next Thursday-night poker party. The gang were all missile men and they cheered and jeered as he hammed up the introduction.

“Let me copy the diagram, Biff, I could use some of those magnetic waves in the new bird!”

“Those flashlight batteries are cheaper than lox, this is the thing of the future!”

Only Teddy Kaner caught wise as the flight began. He was an amateur magician and spotted the gimmick at once. He kept silent with professional courtesy, and smiled ironically as the rest of the bunch grew silent one by one. The colonel was a good showman and he had set the scene well. He almost had them believing in the Space Wave Tapper before he was through. When the model had landed and he had switched it off he couldn't stop them from crowding around the table.

“A thread!” one of the engineers shouted, almost with relief, and they all laughed along with him.

“Too bad,” the head project physicist said, “I was hoping that a little Space Wave Tapping could help us out. Let me try a flight with it.”

“Teddy Kaner first,” Biff announced. “He spotted it while you were all watching the flashing lights, only he didn't say anything.”

Kaner slipped the ring with the black thread over his finger and started to step back.

“You have to turn the switch on first,” Biff said.

“I know,” Kaner smiled. “But that's part of illusion – the spiel and the misdirection. I'm going to try this cold first, so I can get it moving up and down smoothly, then go through it with the whole works.”

He moved his hand back smoothly, in a professional manner that drew no attention to it. The model lifted from the table – then crashed back down.

“You jerked it, instead of pulling smoothly,” Biff said and knotted the broken thread. “Here let me show you how to do it.”

The thread broke again when Biff tried it, which got a good laugh that made his collar a little warm. Someone mentioned the poker game.

This was the only time that poker was mentioned or even remembered that night. Because very soon after this they found that the thread would lift the model only when the switch was on and two and a half volts flowing through the joke coils. With the current turned off the model was too heavy to lift. The thread broke every time.

“I still think it's a screwy idea,” the young man said. “One week getting fallen arches, demonstrating those toy ships for every brat within a thousand miles. Then selling the things for three bucks when they must have cost at least a hundred dollars apiece to make.”

“But you did sell the ten of them to people who would be interested?” the older man asked.

“I think so, I caught a few Air Force officers and a colonel in missiles one day. Then there was one official I remembered from the Bureau of Standards. Luckily he didn't recognize me. Then those two professors you spotted from the university.”

“Then the problem is out of our hands and into theirs. All we have to do now is sit back and wait for results.”

“What results?! These people weren't interested when we were hammering on their doors with the proof. We've patented the coils and can prove to anyone that there is a reduction in weight around them when they are operating....”

“But a small reduction. And we don't know what is causing it. No one can be interested in a thing like that – a fractional weight decrease in a clumsy model, certainly not enough to lift the weight of the generator. No one wrapped up in massive fuel consumption, tons of lift and such is going to have time to worry about a crackpot who thinks he has found a minor slip in Newton's laws.”

“You think they will now?” the young man asked, cracking his knuckles impatiently.

“I know they will. The tensile strength of that thread is correctly adjusted to the weight of the model. The thread will break if you try to lift the model with it. Yet you can lift the model—after a small increment of its weight has been removed by the coils. This is going to bug these men. Nobody is going to ask them to solve the problem or concern themselves with it. But it will nag at them because they know this effect can't possibly exist. They'll see at once that the magnetic-wave theory is nonsense. Or perhaps true? We don't know. But they will all be thinking about it and worrying about it. Someone is going to experiment in his basement – just as a hobby of course – to find the cause of the error. And he or someone else is going to find out what makes those coils work, or maybe a way to improve them!”

“Correct. They will be doing the research that will take them out of the massive-lift-propulsion business and into the field of pure space flight.”

“And in doing so they will be making us rich—whenever the time comes to manufacture,” the young man said cynically.

“We'll all be rich, son,” the older man said, patting him on the shoulder. “Believe me, you're not going to recognize this old world ten years from now.”